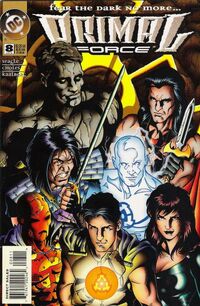 The Leymen are a group of mystical heroes brought together by Maltis to protect the Earth from magical threats. The team also became known as Primal Force the team exisited for a short period following the time crisis of Zero Hour. The order of the Leymen have defended the planet for well over 2,000 years. They battled threats such as Cataclysm, Satanus, and the cult called August. The team disbanded following a confrontation with Cataclysm in New York's Central Park, though its members stand ready. Jack O'Lantern (Liam McHugh) in particular remembers a prophecy that foretold he would one day lead the team.

Retrieved from "https://heykidscomics.fandom.com/wiki/Leymen?oldid=1663434"
Community content is available under CC-BY-SA unless otherwise noted.