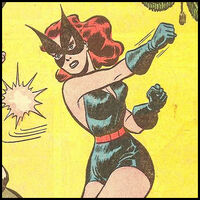 Linda Turner was the daughter of silent film western actor Tim Turner and a former Hollywood stunt woman. Linda had successfully made the transition from stunt woman to lead actress. During the filming of an unnamed picture, Linda suspects the film's director, Garboil of being a Nazi spy or at the very least an American Bund member. In order to follow him and gain corroborating evidence, she disguises herself in a backless blue blouse, red shorts, blue flared gloves, red buccaneer boots and a blue opera mask and calls herself The Black Cat.

While following Garboil, Black Cat meets Rick Horne, a reporter for the Los Angeles Globe who has been assigned to investigate rumors of a Nazi spy ring in LA. Initially disdainful of each other, the pair are forced to work together and discover that Garboil is planting secret information in his motion pictures. Using her knowledge of the studio, Black Cat sneaks into the editing room and changes the edit of the picture to render the information useless. When they are discovered, Rick and Cat physically overpower the gang and turn them in. Garboil escapes and Linda decides to maintain her Black Cat identity in order to keep watch over his activities.

Retrieved from "https://heykidscomics.fandom.com/wiki/Linda_Turner?oldid=1610914"
Community content is available under CC-BY-SA unless otherwise noted.