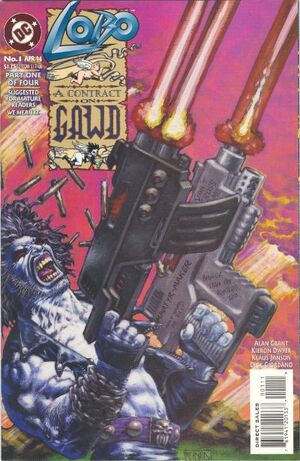 Genuflect on this, Creeps!

Appearing in "Part 1: Trouble in Paradize"Edit

Synopsis for "Part 1: Trouble in Paradize"Edit

Lobo is approached by a group of monks in a space bar, who want to hire his services as a hitman to kill their oppressive deity, a being known as "Gawd". As they speak, the terrified monks are progressively smitten by bolts of lightning from the sky, and killed whenever each of them attempts to commit some sort of sin. Lobo agrees to perform the hit, although insisting that as he's promised Vril Dox not to accept money for bounty work anymore, he'll do it as a freebie just for the opportunity of fragging a cosmic being. On the monks' homeworld, "Paradize", Lobo enters a local church and demands that the preacher inform him where to find Gawd. He gets in a fight with the local police force (the "Sin Police"), and ends up gassed and thrown into jail. After discerning from a fellow prisoner that Gawd apparently resides in the "Valley of the Sound of Music", Lobo easily escapes his captivity with his Spacehog and proceeds to frag every single Sin Policeman he can find before heading off to find Gawd.

Retrieved from "https://heykidscomics.fandom.com/wiki/Lobo:_A_Contract_on_Gawd_Vol_1_1?oldid=1500875"
Community content is available under CC-BY-SA unless otherwise noted.