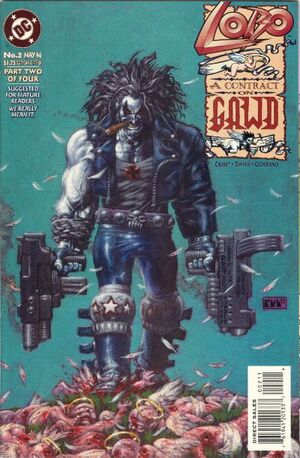 Feetal's Giz! Not a broad or booze in sight! What kinda God would make this his special place?

Appearing in "Part II: The Temptations of St. Lobo"Edit

Synopsis for "Part II: The Temptations of St. Lobo"Edit

Angels attack Lobo and he kills all but one of them. He screams for Gawd to appear or else he'll kill the last angel. Gawd arrives, and Lobo kills the final angel. Lobo attacks Gawd, but Gawd just throws up a force shield that blocks Lobo from doing him any harm. Gawd offers Lobo women, riches and power to leave Gawd alone. Lobo declines and takes Gawd's name in vain, allowing Gawd to send him to Hell.

In Hell, some demons knock out Lobo.

Retrieved from "https://heykidscomics.fandom.com/wiki/Lobo:_A_Contract_on_Gawd_Vol_1_2?oldid=1500934"
Community content is available under CC-BY-SA unless otherwise noted.