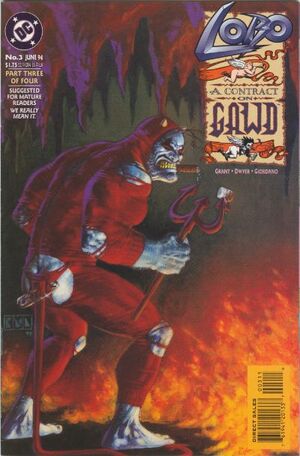 What a rush! I ain't had so much fun since I stitched my gandad's eyes shut and sent him walkin' through traffic!

Appearing in "Better to Rule in Hell"Edit

Synopsis for "Better to Rule in Hell"Edit

In Hell, demons chop off part of Lobo's tongue. Lobo makes one of the demons eat his tongue and kills the other two. Lobo intimidates his way out of Hell.

Retrieved from "https://heykidscomics.fandom.com/wiki/Lobo:_A_Contract_on_Gawd_Vol_1_3?oldid=1440714"
Community content is available under CC-BY-SA unless otherwise noted.