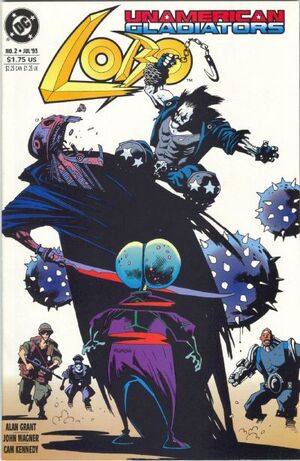 Those about to die, I salute you!

A commercial advertises the murder-themed park facilities on Mondo Carno, including such attractions as Suicide Park where there are "(o)ne hundred and one wonderful ways to die!". Following this, the first event in the Maim Game begins. It is called Beat the Reaper and is a deadly obstacle course where there are no rules except for finishing. Johnny Caesar begins the race. The first obstacle is a climbing wall. B.D. Rickenbacker triggers a trap, which requires the correct answer to a question to avoid punishment. He answers "Stallone" to the question of "Who led the Mongol hordes" and triggered a mechanical punching glove to knock him off the wall.

From L.E.G.I.O.N. headquarters, Vril Dox is seen to be watching the Maim Game, and is confronted by Phase about why he is doing it. He mentions that he can't do anything about it because Mondo Carno is in unregulated space despite him trying to shut it down recently.

Back in the game, Lobo sacrifices his lead to go to the back of the race and kicks Lieutenant Mitch Murphy off climbing ropes into the waiting maw of a massive crocodile. B.D., still begrudging the loss of the driver of the tour bus, knocks Lobo into the crocodile's mouth as well. Just as B.D. was receiving Lobo's prizes for killing him, Lobo bursts out of the crocodile's gut, getting back into the running. Both B.D. and Lobo meet on the Minefield after passing through the Pinball Pit. Lobo knocks Yance's bucket away, melting it on a damaging tile somewhat but not destroying it. Suddenly, Caesar announces that it's time to Meet the Reaper, and massive machine shaped like the Grim Reaper, complete with scythe, is revealed in front of the minefield. It immediately kills The Flies and then goes for Lobo, who is able to avoid it's attacks and ends up destroying it instead.

Killer and B.D. are still in the pinball pit, and Killer is about to be impaled on one of the massive spiked balls just before Caesar calls an end to the game for Lobo beating the Reaper. As a prize, Lobo wins his weight in gold. Killer and B.D. argue about Yance at the end, but get a spot prize of barbed-wire nose rings. Caesar announces that 10 out of 16 teams remain (the six individuals and teams that were eliminated are Clawdius the Fourth, Pieor the Ultraboar, The Ivy League, The Flies, the Ladies from Hell, and Krakas the Khund) but more must be culled.

Back at L.E.G.I.O.N. headquarters, Dox reveals to Phase that the reason he is allowing Lobo to participate in the Maim Game is that he believes that it is fixed. If he can prove that then he has the evidence he needs to shutdown Mondo Carno - though he gave Lobo no knowledge of this plan.

Retrieved from "https://heykidscomics.fandom.com/wiki/Lobo:_Unamerican_Gladiators_Vol_1_2?oldid=1440727"
Community content is available under CC-BY-SA unless otherwise noted.