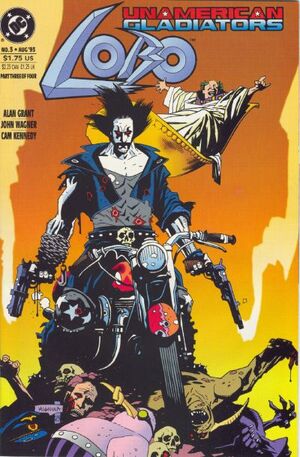 Round 2 of the Maim Game, Suicide Park, is about to begin. Before it does, Johnny Caesar goes to the Casualty Ward, where Vyle Deeds, Russell Muscle, and The Flies are recovering. Johnny Caesar presents them with a platinum trophy, but before they can receive it, The Satan Brothers gun them down. Lobo and the rest of the surviving gladiators watch this on a television set in a bar, and he asks why the moratorium on killing other competitors doesn't apply to the Satan Brothers. B.D. Rickenbacker and Killer Kowalski in the meantime try to form an alliance with Lobo.

In Johnny Caesar's trailer, Candy Immature informs Caesar that Victor Immature has found out about their affair. Victor appears and informs the pair that "nobody cuckolds Victor Immature!" as he threatens to reveal the truth about the Maim Game - that it's fixed. However, before he can do that he is knocked out by one of the Satan Brothers. They are then told to go after Lobo and eliminate him. On Cairn, Vril Dox reveals to Phase that the last two winners of the Maim Game have either been killed or disappeared and that Caesar must have a plant as a team to ensure that Lobo and the other competitors are killed.

In Suicide Park, the competition begins, with the rules stipulating that the competitors must kill each other as well as aid any of the patrons of the park looking to end their lives. Lobo starts near the Biker Kebab - a motorcycle ramp leading to a wall of massive spikes - and uses his hook 'n' chain to liberate a bike from a suicider. He quickly kills Maw and Paw Muscle as he rides around the arena. Meanwhile, members of the Lost Platoon injure Voracio the Predator but didn't realize that they were on the Deathslide and all end up becoming victims of it, eliminating them as well.

The Satan Brothers assist a suicide, granting them the prize of a voucher for a Miracle from he Healers of Helzapopin, which is the only prize that B.D. Rickenbacker wanted. Voracio the Predator is dragged underwater at the Drowning Pool and killed by the The Beast from Sixty Fathoms, who is then eliminated himself by Wolfman Marv. Killer Kowalski eliminates Rocky Stonebone. Lobo confronts the Satan Brothers who fire upon him from the Hive of Death. Lobo's bike is destroyed, so he charges the brothers, but finds that the hive exterior is weakened and falls into it, being stung by massive wasp-like insects. Caesar announces "We can say goodbye to Lobo! No one has ever survived the Hive of Death!"

Retrieved from "https://heykidscomics.fandom.com/wiki/Lobo:_Unamerican_Gladiators_Vol_1_3?oldid=1440728"
Community content is available under CC-BY-SA unless otherwise noted.