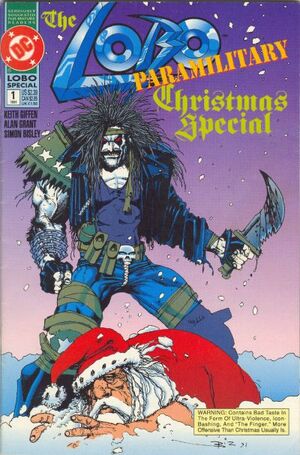 Rudolph the Mutant Reindeer
Was very aptly named
He had a fraggin' monstrous schnozzle
Of which he was ashamed
Then one starry xmas night,
Lobo came to say --
"Rudolph lead my sleigh tonight --
Or I'll blow you away!"

Followed by Rudolph pleading: "No! Never! You're Naughty! Much too naughty!" followed by a gunshot and a loud thud.

Retrieved from "https://heykidscomics.fandom.com/wiki/Lobo_Paramilitary_Christmas_Special_Vol_1_1?oldid=1713815"
Community content is available under CC-BY-SA unless otherwise noted.