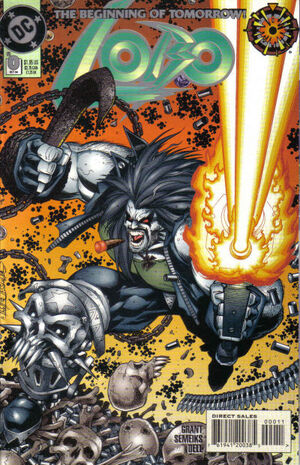 Several frantic and wounded bandits are on the run from Lobo, seeking refuge in a building and discussing rumors they heard about Lobo while in jail. They contemplate their options in dealing with the Main Man and fully discuss Lobo's origins and countless encounters with other powerful beings and their outcomes. They recall how they got themselves into this situation- Lobo prevented the bandits from robbing Al's Diner and obnoxiously convinced the bandits to rob Bunsen's bounty instead (due to general dislike of Bunsen for stiffing him on his bounties). The bandits foolishly attempted to rob Lobo and he sliced off Derv's arm during the scuffle. The bandits knocked Lobo out and make their getaway with Bunsen's money (and Lobo's bounty reward money). The bandits hear on the radio live coverage of the aftermath of their heist when they realize that they've just tried to rob Lobo (the Main Man himself). Lobo arrives and slaughters them in his own unique stlye and returns to Al's Diner.

Big Mig Uses a stone hammer with the initials "M.C." engraved on it a parody of M.C. Hammer