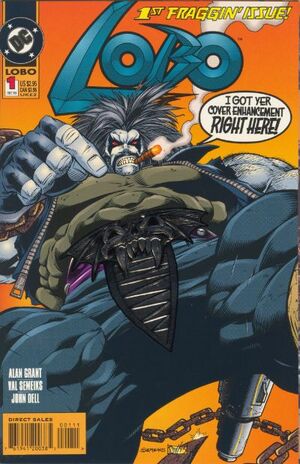 After attempting to claim a bounty, Lobo runs into a old "friend", Jonas, at the grand opening of Al's Diner. They fight, destroying the diner, and afterwards reconcile. Lobo allows Jonas to tag along on a bounty worth ten million credits claiming, "What kinda guy would I be if I didn't cut a buddy in on ten million greenies?" Meanwhile Mort Fatale and The Dead Boys are holed up in a warehouse with Qigly. The Pan-Galactic Mob is tipped off as to the warehouse's location and pursues the bounty. All Pan-Galactic Mob members that attempt to ambush the warehouse are slaughtered upon entry. Quietus and Murder talk with Bunsen in private and are cut a side deal to ruin Lobo for good as Lobo and Jonas leave.

Retrieved from "https://heykidscomics.fandom.com/wiki/Lobo_Vol_2_1?oldid=1500916"
Community content is available under CC-BY-SA unless otherwise noted.