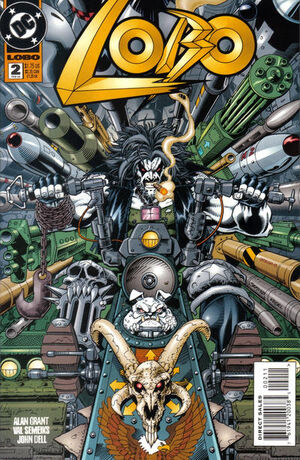 But forewarned is Fore-Fraggin'-Armed, right?

Appearing in "The Qigly Affair (Part II of IV): Tanks for the Memories"Edit

Synopsis for "The Qigly Affair (Part II of IV): Tanks for the Memories"Edit

Lobo and Jonas arrive at Planet Vurkan and enter the corrupt and violent Dagma City searching for the location of Qigly and The Dead Boys. Lobo gathers tips with his usual torture/interrogation techniques and searches for the location. Meanwhile Mort Fatale assures his plans go accordingly digging a escape tunnel and disposing of the Pan-Galactic Mob. Quietus and Murder are stalled at Dagma City Spacepolice customs. Lobo follows the Pan-Galactic Mob's trail of infantry to the Deadboys Warehouse and gets caught in a crossfire with nowhere to hide.

Retrieved from "https://heykidscomics.fandom.com/wiki/Lobo_Vol_2_2?oldid=1500921"
Community content is available under CC-BY-SA unless otherwise noted.