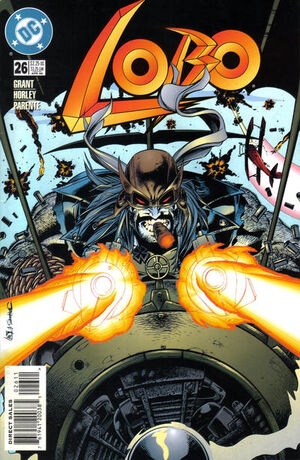 Tartan Quarantino has just purchased a life insurance policy for Lobo. Meanwhile, Lobo and Jonas Glim head to the Big Big Arms Bazaar, where Lobo is excited to update his armory. However, he trips on a cable and spills his beer on Erik the Khund's Totem Pelt. Lobo then takes the Totem Pelt and wrings it to drink the spilt beer. Erik is extremely insulted by this and slaps Lobo, challenging him to a duel to the death as per the Khund's Savage Code. One of the Bazaar's staff objects, but Jonas knocks him out. Lobo is about to attack with his hook 'n' chain, but Erik stops him, informing him that under the Khund's code, the insultee gets to choose weapons.

Erik's choice of weapons are rapiers. Early on, Jonas begins to take bets on the match as the crowd initially thinks that Erik is looking like the favorite. Lobo draws first blood, and then they fight until both of their rapiers break down to the guard. They both stab each other with the broken rapiers, and then agree to escalate the duel. Lobo goes for a powerax and Erik an electrified whip; eventually they change to firearms, and finally to bazookas. The Bazaar security forces eventually show up and try to stop the fight, who get summarily obliterated by a bazooka blast from Lobo.

After the bazooka duel ended in a draw, both agree to escalate again. Lobo goes for a World War 2 style fighter plane, while Erik takes a "One Man Blam-O-Copter". They fire on each other in the air before colliding. Both survive and confront each other again, though the battle has taken a serious toll on both. Lobo finally admits to the Khund's toughness and asks if he wants to go "all th' way" - Erik agrees, and they head for the Binky-brand nuclear warheads.

Jonas and a number of the Bazaar patrons escape outside, and Lobo and Erik take the nukes to each other and cause a huge nuclear explosion. Out of the burning ruins of the bazaar, Erik can be seen, and some of the crowd tell Jonas that he's going to have to pay up - until walking out of the flame is none other than Lobo, hoisting Erik's head on a pike. Tartan receives a message that the insurance company has to pay out twelve billion credits for the damage, which has bankrupted them. Tartan says that twelve billion is a lot even for Lobo and inquires to the cause - Lobo simply says that he spilt his beer.

There is a secondary comic strip advertising the product line of Binky Bombs.

Retrieved from "https://heykidscomics.fandom.com/wiki/Lobo_Vol_2_26?oldid=1440665"
Community content is available under CC-BY-SA unless otherwise noted.