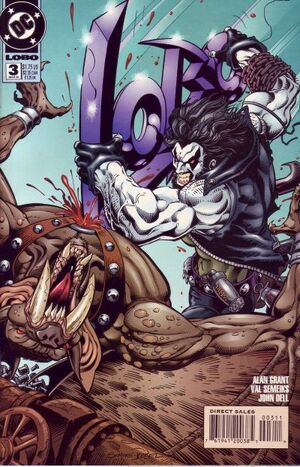 Lobo and Jonas narrowly escape death in the crossfire by burrowing into the sewers and luckily stumble across the Dead Boys and Qigly attempting to escape. The Pan-Galactic Mob pursue Lobo and Jonas through the hole they dug into the sewers. Lobo and Jonas ambush/are apprehended by the Dead Boys and erupt into battle while Mort Fatale makes a run for it with Qigly. Lobo battles and defeats both Koody Graz and Jug while Jonas and Dawg battle Bloodstain and his goon lookalike version. After Lobo mutilates Koody Graz and Jug, he disembowels Mort Fatale and claims Qigly while Quietus and Murder await there perfect opportunity to ruin Lobo's bounty. The Mob destroys the sewers and everyone is scattered in a tidal wave of sewage. Lobo discovers Quietus and Murder and beats them up for trying to cross him. He makes his escape with Qigly.

Retrieved from "https://heykidscomics.fandom.com/wiki/Lobo_Vol_2_3?oldid=1500923"
Community content is available under CC-BY-SA unless otherwise noted.