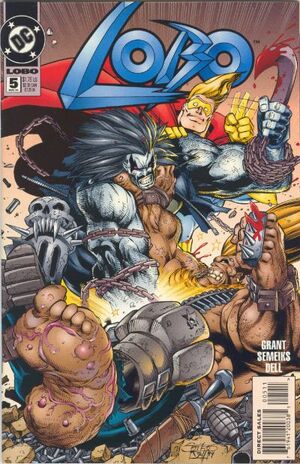 BLOW IT OUT YER BUTT, CREEP! I FRAGGED MY MOTHER AFORE SHE EVER TOLD ME ANYTHIN'!"

Vril Dox gives Lobo a break and assigns him a hundred thousand credit bounty to capture a terminally ill psychopath named Bludhound before his disease kills him. Lobo stumbles upon Bludhound and they instantly engage in an intense battle that destroys both of their bikes and sends them sailing down into Bludhound's destination, the planet Harmony, where the two encounter by Gold Star. Goldstar, being Harmony's hero, attempts to prevent Lobo and Bludhound from further destructive fighting. It is discovered that Bludhound's intentions were to discover his twin brother before his death and that Gold Star is Bludhound's brother. Bludhound rejects Gold Star's affection and sends him flying into a building before he dies from his disease, leaving Lobo once again bounty-less. Gold Star awakes believing Lobo to be the cause of his new found brother Bludhound's death and it is foreshadowed the Gold Star will seek revenge upon Lobo.

Retrieved from "https://heykidscomics.fandom.com/wiki/Lobo_Vol_2_5?oldid=1500943"
Community content is available under CC-BY-SA unless otherwise noted.