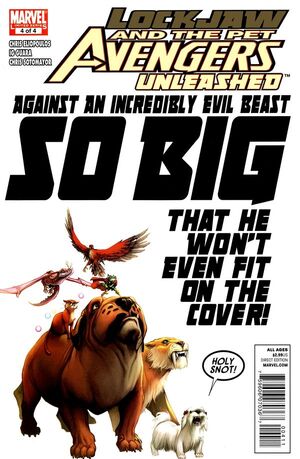 WHO IS THE GOLDEN ONE? The answer may mean the destruction of the Pet Avengers. Will the team make the ultimate sacrifice to save their friends’ world? Find out in the action-stuffed finale by Eisner-nominated CHRIS ELIOPOULOS and fan favorite artist IG GUARA!

Retrieved from "https://heykidscomics.fandom.com/wiki/Lockjaw_and_the_Pet_Avengers_Unleashed_Vol_1_4?oldid=1445660"
Community content is available under CC-BY-SA unless otherwise noted.