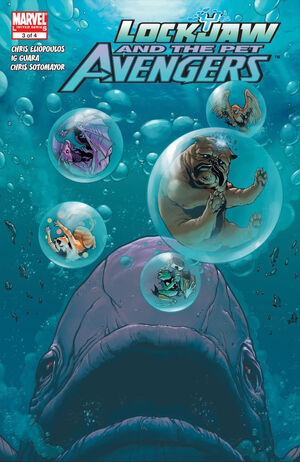 Greetings, my animal friends. It seems you have things that belong to me and I want them back!

Appearing in "We Are A Band of Brothers"Edit

Synopsis for "We Are A Band of Brothers"Edit

The Pet Avengers crash into the ocean, but are saved by Namor's Honor Guard turtles, who agree to help them find two more of the gems. Unfortunately, they are inside Giganto. The turtles flee and Hairball finally freaks out about so much water, waking up Giganto, who swallows them. Inside, Ms. Lion finds the gems, and they teleport away to the location of the final gem, the White House. The final gem is located in the Bo's collar. Bo takes off barking out the front door, and the Pet Avengers follow, only to run headlong into Thanos.

Retrieved from "https://heykidscomics.fandom.com/wiki/Lockjaw_and_the_Pet_Avengers_Vol_1_3?oldid=1445663"
Community content is available under CC-BY-SA unless otherwise noted.