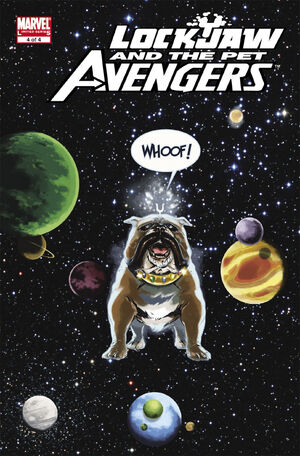 Lockjaw has used the power of the gems to create a telepathic link between us. Long after the gems are gone, we will have a psychic bond that none can break. An if the world ever has need of the Pet Avengers again, we will stand ready.

Appearing in "You Will Pay For What You Did!"Edit

They’ve been up/down/around/about/forward/backward. They’ve gone to the jungle/ocean/Central Park/outer space. They’ve scratched/pawed/clawed/gnawed their way throughout all existence, ALL for this moment! Now they’ve FINALLY found all of the Infinity Gems…so what’s a moon-puppy to do when he’s given all the power in the universe? FIND OUT HERE!!!! Featuring a VERY special presidential puppy appearance!

Retrieved from "https://heykidscomics.fandom.com/wiki/Lockjaw_and_the_Pet_Avengers_Vol_1_4?oldid=1445664"
Community content is available under CC-BY-SA unless otherwise noted.