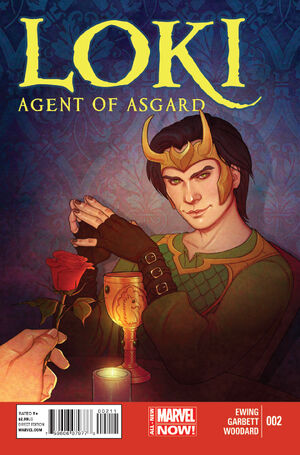 Appearing in "Loki and Lorelei, Sitting in a Tree..."Edit

Synopsis for "Loki and Lorelei, Sitting in a Tree..."Edit

At a speed dating site, someone rejects every applicant, possessing some manner of ability to see through lies and misdirection. Then, of the applicants, the last happens to be Loki. He informs the woman opposite him as to what he is doing, and asks her to tell if it's a lie. She finds out it isn't. As it transpires, Loki is at the speed dating service because he is looking for someone by the name of Lorelei.

Three weeks before, the All-Mother appeared before Loki (via means of punch), to task Loki with finding all the Asgardians loose on Earth, and Lorelei in particular, since Loki has a history with the younger sister of Amora the Enchantress, heedless of Loki's then-present desire to fraternize with his new neighbors. With careful analysis, Loki determines that Lorelei has been committing crimes on an annual basis, and had chosen a casino in Monte Carlo for the purpose. Unable to catch her before or after, Loki determined he would have to catch her in the act. However, since he could not use magic, for fear of detection, he had to be himself.

During the heist, Lorelei sends one of her hired thieves to fetch the car, only for the accomplice to be caught by the police, the invisibility charm she had been given having been stolen by Loki. This leaves Lorelei alone with her other accomplice, who turns out to be a shapeshifted Loki, who justifies this by saying he is "always himself".

Before Loki could talk to Lorelei, she disappeared, leaving Loki alone in a vault with a large amount of cash, which he decided to make off with. This brings Loki to the present, where Lorelei is desperate to acquire new funds, the old fashioned way - mugging speed daters. And this time Loki is in disguise, except to the woman opposite him, which has Loki intrigued. The woman, one Verity Willis, explains that she can see through lies, every lie, and has done since she was a child, meaning she cannot even watch a film or read a book, and she is incredibly lonely because of it. Loki reassures her, before heading off to attend to Lorelei.

Outside, the two former lovers talk, Loki informing Lorelei he has obviously failed in his mission to bring her back to Asgardia, much to Lorelei's amusement. She asks why Loki is letting her go free, and he mentions he requires her services. As the two walk and talk, Lorelei notes he seemed taken with Miss Willis. Loki states he has already forgotten her, though Verity, watching from a distance, says this isn't true.

• It’s the battle of the Asgardian younger siblings - from the casinos of Monte Carlo to a speed date in New York!


• Loki goes speed dating. We should have mentioned that earlier, really.

Retrieved from "https://heykidscomics.fandom.com/wiki/Loki:_Agent_of_Asgard_Vol_1_2?oldid=1440817"
Community content is available under CC-BY-SA unless otherwise noted.