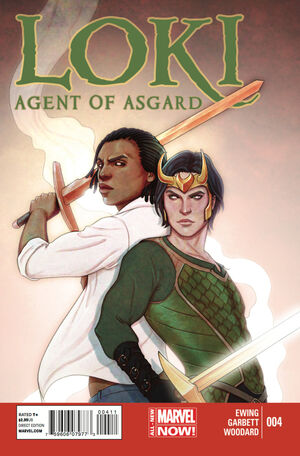 I wouldn't say I felt guilty, exactly. I rarely do. But... Tonight, Asgard's oldest hero is in chains in the dungeons of Asgardia. Because of me. His only crime? Roaming free upon Midgard. In other words, today it's him... Tomorrow it's one of us. So tomorrow, I'm going into the deepest, darkest, dungeon-iest dungeon in all Asgardia-- To crack it wide open. Understand me. This is not a heist. A caper. This is a mission, and if you choose to accept it... You are my agents. So. Who's with me?

Appearing in "Let's You & Him Fight!"Edit

Synopsis for "Let's You & Him Fight!"Edit

On a mountain, somewhere undisclosed, Kaluu the magician is meditating. Or trying to, as his attempts at doing so are being interrupted by someone climbing towards him. It's Sigurd, the Ever-Glorious, and he has an offer to make, with Gram as payment. Kaluu rebuffs his claims of being Asgard's greatest hero, before asking how he re-acquired his old sword.

Some nights before, Sigurd scales an apartment building in Manhattan. Inside, Loki and Verity Willis are talking, the god of mischief having gone to the effort of cooking for her. Verity decides to skip to the business, and asks Loki if he has an ulterior motive for inviting her around. Meanwhile, Sigurd sneaks inside the apartment, using an invisibility belt stolen from A.I.M.. Verity tries to tell Loki she won't help him break into somewhere, only to stop on noticing the invisible Sigurd, carrying Loki's sword.

Sigurd's attempts to flirt with Verity quickly fail, at which point he informs Loki of his intent to borrow his sword for a while, and that there's no need for them to fight. Loki flashes back to some time earlier, to another inconvenient summons from the All-Mother, who are still incensed about his previous failure to retrieve Lorelei, and express hope he's better at finding Sigurd. Loki questions why he needs to bring Sigurd in, when the Dirsir are supposed to be tracking him, only to be implicitly threatened with his own freedom being revoked. Therefore, it's down to Sigurd's freedom, or Loki's. Loki draws his backup sword, Laevateinn, which Sigurd mocks. The two fight, resulting in Loki being kicked out of the window. Fortunately, he's saved by the local washing line, and his seven-league boots. He provokes Sigurd into attacking him again. The two parry, until Sigurd cuts the line, sending both gods plummeting into a dumpster. Violence quickly follows, ending with Gram stabbing through the dumpster, and Sigurd slinking off into the night.

In the here and now, Kaluu asks what exactly Sigurd wants. Conversation turns to the wheel of reincarnation. Since Sigurd, like all Asgardians, is destined to end up in Valhalla, he's concerned about any potential injuries the Valkyrie waiting for him will inflict. In essence, he wants to avoid going there at all, to reincarnate into someone else. Kaluu agrees to help. Using the sword's truth-bearing properties, the two sign an agreement in blood, at which point Kaluu turns out to be Mephisto, who is overjoyed to have tricked a god. The promised "wheel of reincarnation" turns out to be a torture device called "the wheel of rein-incarnation". As Sigurd tries to attack Mephisto, he is restrained, and the carpet Mephisto was sitting on turns out to be the contract. Mephisto goes to examine it.

Only he discovers it's not his contract, it's Loki's. He switched the prayer mats while Sigurd was explaining things, using his vanishing coat, Lorelei's amulet of invisibility, and the invisibility belt to disguise himself. Mephisto is outraged, on account of Loki using cheap misdirection to fool him, something "the young punk" would do. Whispering, Mephisto reveals that he knows what's happened to the younger Loki, and offers his commendations.

Angered, Loki tells him to leave, and Mephisto merrily does. Sigurd, meanwhile, is teleported right into the All-Mothers' throne room, still in chains. Gaea and Igunn both express reservations about imprisoning Sigurd, though Freyja states it is necessary.

Later, Loki addresses someone, stating his guilt over Sigurd's imprisonment, and his intention to go to Asgardia's dungeons and break Sigurd out. He asks Verity, Lorelei and Thor if they are with him.

• …and Loki wants to put a crew together for a caper that’ll rock the nine realms.

• Somebody’s going to get what they want.

Retrieved from "https://heykidscomics.fandom.com/wiki/Loki:_Agent_of_Asgard_Vol_1_4?oldid=1533535"
Community content is available under CC-BY-SA unless otherwise noted.