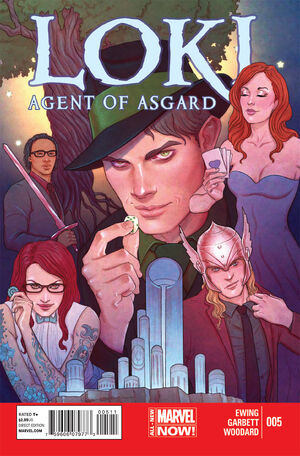 Appearing in "This Mission Will Self-Destruct In Five Seconds"Edit

Synopsis for "This Mission Will Self-Destruct In Five Seconds"Edit

On a Roxxon flight over Oklahoma, a man looks out over the wings to see something no-one else can. It's Loki and Lorelei, preparing to jump off the wings. This is part of Loki's plan to get past Heimdall without being seen, since Heimdall is the first obstacle to getting into Asgardia's dungeons. Fortunately, at the speed Loki and Lorelei are dropping at, the watchman of the gods has only an instant to notice them, and he's distracted by another matter; Thor fighting the forces of the Technocracy up in orbit.

Earlier, Thor and his brother discuss Thor's playing the role of distraction. Thor has misgivings, not just about the plan, but trusting Lorelei. As opposed to Loki, since he believes Loki is not the one who wronged him. He asks his brother why, if he disagrees with the All-Mother, he does not simply confront them. Loki, refusing to believe they have good intent, simply calls in the favor owed by saving Thor from the case of possession some weeks earlier.

Now, and Thor notes he remembers the favor, and shall discuss it the next time he and Loki meet. With Heimdall suitably distracted, Loki and Lorelei use a Charm of Liquid Solids to enter the dungeons of Asgardia. As they make their way through them, Lorelei notes the total absence of any guards, which Loki puts down to the Room Full of Incredibly Deadly Traps, the second obstacle on their way in. As Loki notes, what makes the traps so incredibly deadly is that some of them aren't there at all. Fortunately, he has help with that; a cell-phone with magically boosted connection, and Verity Willis, who can see through the illusions for them.

That done, Loki and Lorelei reach the third obstacle, an impregnable gate, which neither of them can open. Fortunately, at that point, Sigurd the Ever-Glorious opens the door for them.

Earlier than earlier, in the dumpster Loki and Sigurd wound up in during their fight, Loki begins randomly kicking the sides, while explaining his plan; Sigurd gets captured in order to act as Loki's inside man in Asgardia, with the illusion of Loki's defeat helped by a handy bottle of ketchup to fool any observers. Back in the present, Lorelei starts to point out Loki said they were breaking into the most secure prison in Asgardia. Loki tells her Sigurd was the second most secure. Exasperated, Lorelei leaves, and Sigurd goes with her, leaving Loki to his own devices. Peering through one door, all Loki can find is an odd map, with a large 'x' on the top. He concludes that the cell he's looking for has no door. At which point, he comes face to face with Loki. The Old Loki.

Loki tries to claim he was suspicious, but Old Loki shoots this down, claiming he was just looking for a means to wash his hands of his past crimes. Angered, Loki stabs Old Loki with Gram. It has no effect on Old Loki, who points out that it shows the truths one hides, and this Loki hides nothing. He's well-aware he's the villain, and he enjoys it. He then tells Loki he is responsible for Gram's creation. And that's he's not the old Loki.

He is Loki's future, what Loki will become. At this point the All-Mother arrive, and demand Old Loki tell them the truth. He explains that in the future, Asgard will be ruled justly by a King Thor, with Loki as the ever-recurring villain, something the older Loki actually finds agreeable, though he quickly dodges the question of what happens to Midgard in that future.

Loki, meanwhile, asks Frigga how she can allow this future to happen, to allow Asgard to be re-chained by destiny. Frigga's response is simple; knowing that there will be security, peace without the threat of Ragnarok, a better future, is a miracle, regardless of what happens. Angered, Loki quits his service. As he departs, Old Loki announces that he will make sure the future Asgard will come into being, for he is its agent.

Later, when a despondent Loki returns to his apartment, the older Loki appears in his bathroom mirror to taunt him, stating that worse events are yet to come.

• It’s the ultimate caper - but is there one plot twist too many for even the God of Trickery to handle?

• This movie rated :( for tears before bedtime.

Retrieved from "https://heykidscomics.fandom.com/wiki/Loki:_Agent_of_Asgard_Vol_1_5?oldid=1440820"
Community content is available under CC-BY-SA unless otherwise noted.