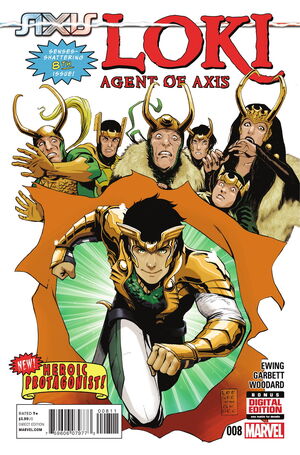 For pureness of heart... is the greatest magic of all!

Appearing in "I Cannot Tell A Lie!"Edit

• Marvel’s most honest and upright hero -- now in his own magazine!

• With a quip on his lips and a song in his merry heart, Loki continues his dashing quest for truth, justice and the Asgardian Way!

• Guest-starring -- the Enchantress! And some other people who think Loki’s “changed” somehow. BUT MOSTLY, THE ENCHANTRESS!

Retrieved from "https://heykidscomics.fandom.com/wiki/Loki:_Agent_of_Asgard_Vol_1_8?oldid=1440823"
Community content is available under CC-BY-SA unless otherwise noted.