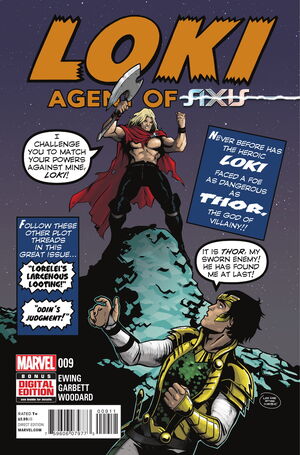 • Loki, swashbuckling savior of truth and justice, versus Lorelei -- scheming sister of the noble Enchantress!

• Once -- in a time Loki would rather forget -- these two were allies. Now, Loki must bring Lorelei in -- or die trying!

• Also featuring: the base villainy of Thor -- Marvel’s brutish God Of Evil!

Retrieved from "https://heykidscomics.fandom.com/wiki/Loki:_Agent_of_Asgard_Vol_1_9?oldid=1642355"
Community content is available under CC-BY-SA unless otherwise noted.