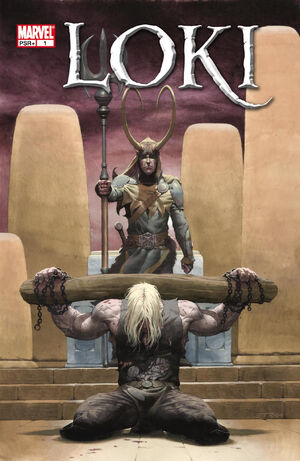 Kneel, God of Thunder. Kneel before your conqueror. Kneel, as is your desert and destiny, before Loki Laufeyson. Kneel as all Asgard must, before her new and rightful lord.

Loki has claimed leadership of Asgard, and all must recognize that fact, even Thor. Thor and Sif are his prisoners, but finally winning his long sought prize, is not quite as sweet as he once thought. The ones that helped him now demand their due, including the death goddess Hela.

Retrieved from "https://heykidscomics.fandom.com/wiki/Loki_Vol_1_1?oldid=1440808"
Community content is available under CC-BY-SA unless otherwise noted.