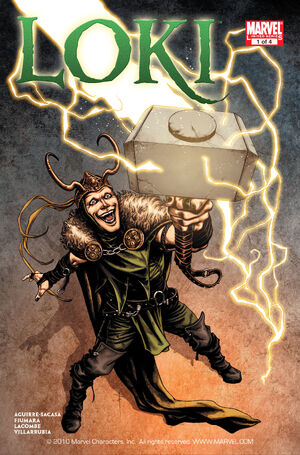 Appearing in "It Should Have Been Mine..."Edit

Synopsis for "It Should Have Been Mine..."Edit

Loki has gone into exile on Midgard after the death of Balder. He is eventually located by Thor, and they reminiss about Loki's mischief, resulting the the shorning of Sif's hair, the creation of great treasures, and the sewing of Loki's lips shut.

Retrieved from "https://heykidscomics.fandom.com/wiki/Loki_Vol_2_1?oldid=1440812"
Community content is available under CC-BY-SA unless otherwise noted.