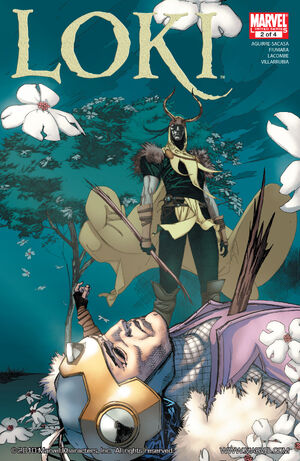 Devious Loki! Murderous Loki! Poor Loki, wants only to make a difference in Asgard, to be important, to be remembered. But when the Norns who see fate itself tell him just how it is he’ll succeed…well, what else is there for crafty Loki but to play his destiny to the hilt? Now Loki embraces his future, the doom of all Asgard…and commits the greatest atrocity of his lifetime...

Balder can only be killed by mistletoe

Retrieved from "https://heykidscomics.fandom.com/wiki/Loki_Vol_2_2?oldid=1440878"
Community content is available under CC-BY-SA unless otherwise noted.