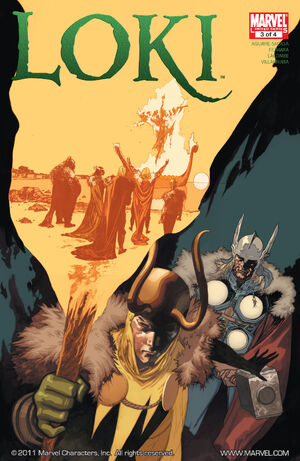 Appearing in "Funeral For a God"Edit

Ragnarok! The end of all things has been set in motion, and if Thor has any hope of saving Asgard, his only choice is to descend into the darkest, most treacherous depths of Hel, land of the dead. As his guide, guardian and only companion…crafty Loki! Whose intemperate trickery was what doomed Asgard to begin with. Does Loki seek redemption in the eyes of Thor…or the best opportunity to stab him in the back?

Retrieved from "https://heykidscomics.fandom.com/wiki/Loki_Vol_2_3?oldid=1440877"
Community content is available under CC-BY-SA unless otherwise noted.