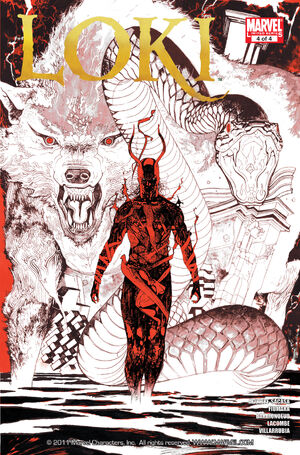 Old Odin... Because of what I've done...there will be no Asgard soon. The Age of Odin and his sons is ending... Fire and chaos are coming. And I am the Lord of Chaos!

Appearing in "The Crooked Path"Edit

Loki vs. Thor and Asgard – with the fate of all at stake! Ragnarök and the end of everything! Utter and total destruction is the inescapable destiny predicted for Asgard, incited by the destructive tendencies of the god of trickery. Loki has already set Ragnarök in motion, and now, if the end of the nine worlds is to be averted, Loki MUST be stopped. But how can even the gods escape the fates foretold in their stories?

Retrieved from "https://heykidscomics.fandom.com/wiki/Loki_Vol_2_4?oldid=1440876"
Community content is available under CC-BY-SA unless otherwise noted.