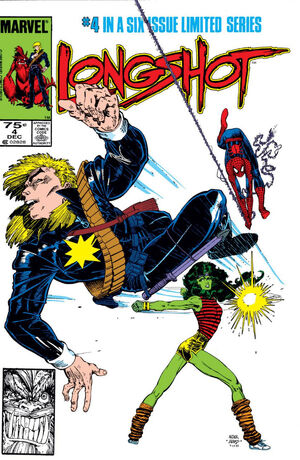 Appearing in "Can’t Give It All Away!"Edit

Synopsis for "Can’t Give It All Away!"Edit

The news shows Longshot as the man who caused the blackout and stole Con Ed’s diamonds. Longshot is trying to give away the diamonds to make amends but, apart from a group of kids, nobody wants them. He runs into two heroes, She-Hulk and Spider-Man, who try to capture him. Both fail, once Longshot focuses his luck, but both foster in him the belief that he no longer knows what is real. He meets the kids again, who tell him they have seen a monster. Reading their gun, he recalls leading a rebellion and being mindwiped. He goes to see their monster, a monstrously grown Pup. Longshot refuses to believe in him and is attacked. Elsewhere, the insane Spineless One, Mojo, is informed about Longshot and the world of real men he now resides in. He has Spiral teleport him to Earth. They reach the home of Longshot’s friend, Ricochet Rita, and threaten her and announce that she will lead them to Longshot.

Retrieved from "https://heykidscomics.fandom.com/wiki/Longshot_Vol_1_4?oldid=1525736"
Community content is available under CC-BY-SA unless otherwise noted.