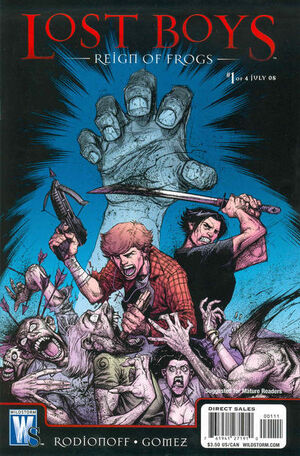 2007
A teenage boy comes to the trailer of surfboard shaper Edgar Frog in Luna Bay, California. He wants to learn from the art of hunting vampires. Edgar is incredulous of the boy's identity and puts him through a battery of tests to prove that he is not a vampire himself. As the boy convinces Edgar of his earnestness, Edgar decides to tell him a story.

1990
In Washington, D.C. Edgar Frog and his brother Alan fight a nest of vampire congressmen known as the Arlington Coven. They deftly fight through the vampire ranks, slaughtering the entire horde. Edgar decapitates the coven leader Senator Albert Lucard. He brings his severed head to the White House and presents it to President George Bush as proof of his victory. As reward for their efforts, the Frog Brothers are presented with the Van Helsing Medals of Honor.

As they attempt to leave the nation's capitol, they hail a taxicab only to discover that the cab driver is a surviving member of the Arlington Coven. Alan Frog impales him with a souvenir replica of the Washington Monument.

The boys soon return to their home town of Santa Carla. What they don't realize is that someone else has returned to Santa Carla as well, their vampire nemesis David.

Retrieved from "https://heykidscomics.fandom.com/wiki/Lost_Boys:_Reign_of_Frogs_Vol_1_1?oldid=1455270"
Community content is available under CC-BY-SA unless otherwise noted.