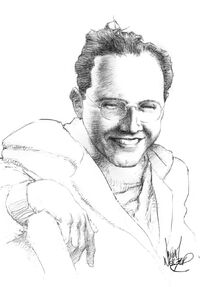 Louis Fine (November 26, 1914 – July 24, 1971)[1][2] was an American comic book artist known for his work during the 1940s Golden Age of comic books, where his quality draftsmanship became an influential model to a generation of fellow comics artists.

[[wikipedia:Image:Hit Comics Vol 1 5.jpg|thumb|left|Hit Comics #5 (Nov. 1940). This cover, used in The Steranko History of Comics 2 (1972), helped introduce Fine's art to a new generation.|]] Lou Fine was born in either the Manhattan[3] or Brooklyn[4] boroughs of New York City, the son of a house painter, Meyer, who was possibly a Russian immigrant.[4] Fine's mother died while Fine was attending Cooper Union college, studying engineering.[4] He had an older brother, Sam, who died in October 2000, at age 86, and a sister.[4] According to Fine's son Elliot, Lou Fine's family lived in the Brooklyn neighborhood of "East New York, which was called Brownsville in those days.... It was a tenement Jewish neighborhood back then".[4]

Either at about age two[4] or in his early teens,[3] Fine's left leg became crippled by polio.[3] Developing a talent for art, and influenced by such commercial illustrators and other artists as Dean Cornwell, Heinrich Kley, and J.C. Leyendecker,[3] Fine went on to study at Manhattan's Grand Central Art School and Brooklyn's Pratt Institute.[3] In 1938, Fine, like many other comics artists of the time, found work at Eisner & Iger, a prominent "packager" that supplied complete comic books to publishers testing the waters of the emerging medium. Fine's first published comics art was the strip "Wilton of the West" in Fiction House's Jumbo Comics #4 (Dec. 1938), signed with the house Pen name Fred Sande[5] (which strip originator Jack Kirby had used in previous issues). Other early pseudonyms Fine employed (reflecting the fledgling Eisner & Iger's attempts to convince publishers they had a large stable of artists) were Curt Davis and Basil Berold. Eisner would later say, "I had respect for his towering kind of draftsmanship. He was the epitome of the honest draftsman. No fakery, no razzle-dazzle — very direct, very honest in his approach".[5]

Fine went on to do exquisite and acclaimed work for Fox Feature Syndicate, where he supplied the cover of 1939's Blue Beetle #1 and drew such features as "The Flame" in Wonderworld Comics and the later eponymous series. For publisher Everett M. "Busy" Arnold's Quality Comics, he drew features including "The Black Condor" (initially under the pseudonym Kenneth Lewis) in Crack Comics; "Doll Man" (under the pseudonym William Erwin Maxwell) in Feature Comics; "The Ray" (initially under the jokey pseudonym E. Lectron) in Smash Comics; "Uncle Sam" (for which Eisner & Iger co-founder Will Eisner received credit) in National Comics; and "Stormy Foster" in Hit Comics. Fine became particularly prominent as a cover artist.

Fine, along with Plastic Man creator Jack Cole, was a ghost-artist on Will Eisner's celebrated Sunday-supplement Newspaper comic book The Spirit during Eisner's World War II military service, Fine inking over Cole's pencil work. Some of these were reprinted in Quality's Police Comics and The Spirit comic book, where Fine's work continued to appear through 1949, five years after Fine had left comics.

Joe Simon, an artist and the first editor of Marvel Comics, called Fine his "favorite artist.... He was also Jack Kirby's favorite artist. I know that Jack was a fan of and greatly influenced by Fine’s work".[5]

Leaving comic books in 1944, Fine segued into newspapers by drawing Sunday Advertising comics. He later drew the comic strips The Throp Family for Liberty Magazine (1946), Taylor Woe (1949), Adam Ames (1959) and Peter Scratch (1965). In a single return to comic books, he contributed to a toy company's custom one-shot, Wham-O Giant Comics (1967), illustrating a two-page story, "The Man From Aeons", starring a prehistoric man who, though named "Tor", was not the same-name caveman character created in the 1950s by Joe Kubert.

Fine also worked on the strip Space Conquerors in the magazine Boys' Life from the late 1960s until his death. He and writer Gill Fox, whom he had met during his time with Eisner & Iger and remained in contact with, were developing new comic strips when Fine was found dead of a heart attack at the threshold of his studio.[6]

By the late 1960s, Fine lived in affluent Lido Beach, on Long Island, owning two houses there. Friend and collaborator Gill Fox described them as, "One for his wife and one for himself. He lived alone [by then]".[6]

Atlas Comics (retailer), "The Top 100 Artists of American Comic Books": #10 - Lou Fine: "By God, Lou Fine could draw. One of comics' first illustrative stars, he influenced and astounded such later greats as Alex Toth, Jim Steranko, and Gil Kane. His covers alone during the ' 40s stand as some of the best-designed and most exciting work ever produced for any comic book publisher".[7]

Retrieved from "https://heykidscomics.fandom.com/wiki/Lou_Fine?oldid=1570460"
Community content is available under CC-BY-SA unless otherwise noted.