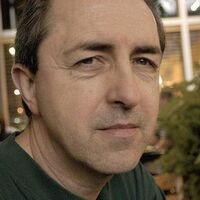 Lovern Kindzierski has been recognized by the Comic Buyer’s Guide survey as one of comics’ most influential colourists of all time. He has designed colour for every major publisher in the industry and been nominated several times as Best Colourist for both the Eisner and Harvey Awards. Lovern won a Wizard Fan Award for his work in 1993 and 1994 as well as a Comic Buyer’s Fan Award in 1998. Lovern holds a Bachelor of Fine Arts Degree (Honours) and his paintings have been exhibited in solo and group exhibitions. Prior to entering the comic industry. After receiving his degree from the University of Manitoba he worked as a courtroom sketch artist and contributed to animation on the Children’s Television Workshop, both as an employee of CBC Television. He then went on to co-found Digital Chameleon and introduce computers to comic book production, which changed the standards of comic production and colour forever. Lovern has also developed a writing career in the comic book industry. His first published writing in the comic industry was a short story in the Marvel Comics “Within Our Reach” anthology, entitled “So This is Christmas”. Since then Lovern has gone on to script the series “Agents of Law” for Dark Horse Comics, then recreate the character “Lunatik” for Marvel through a couple of limited series: “Marvel Presents” and “Lunatik”, and a “Cosmic Powers Special”. In 1997 he wrote six issues of the ongoing “Tarzan” series for Dark Horse, which got him nominated for Best Writer at the following Harvey Awards. After completing his Tarzan work, Lovern was invited to write “The Victorian” series for Penny Farthing Press. Following that, he wrote a series of stories in the tradition of the Arabian Nights for Heavy Metal magazine. These stories have been collected in an album, “Demon Wind”, and are now distributed by Heavy Metal in the United States and by Norma Publishing in Europe. Lovern has also written two bi-monthly titles; “Genesis 5” and “Code”, for the Guardian Line of comics. These books are faith based comics that harken back to the clean super heroes of the 60’s like the early adventures of Spiderman and the X-Men.

SPIDERMAN : Sleep - plot and script for short story (Spidey’s black and white sentient costume is in love with him.)

WHAT IF (Captain America) - colour design

WHAT IF (Submariner) - colour design