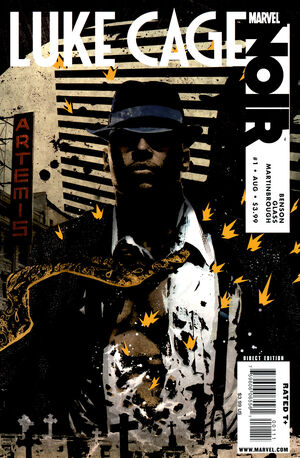 Appearing in "Moon Over Harlem"Edit

A lot can change in ten years. And rarely for the better. Local legend, Luke Cage, invincible, unstoppable, unflappable, finds that out the hard way when he returns to the mean streets of Prohibition-era Harlem after a ten-year stretch in Riker’s Island. All he wants is to be back in the loving arms of his woman, but certain powerful men have different plans for Cage. Willis Stryker, Cage’s childhood friend turned Godfather of Harlem, wants him on his crew, and under his thumb. And wealthy white socialite Randall Banticoff, whose wife is now very dead, murdered in a Harlem alley, wants Cage to investigate her death. Cage is about to learn that coming home is never easy, and to survive he might just have to kill a whole lot of people.

Retrieved from "https://heykidscomics.fandom.com/wiki/Luke_Cage_Noir_Vol_1_1?oldid=1440854"
Community content is available under CC-BY-SA unless otherwise noted.