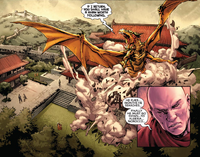 Base Of Operations
China

Unusual Features
Can have wings or be without wings
Origin

History of this race is unknown.

It's likely that Yao of the Great Wall is a Lung dragon (the aquatic variety), per his appearance and his name. It's not confirmed though, being described as a "Sea Serpent".

Lung Dragons (aka, Chinese Dragons) are part of Chinese folklore and mythology (Chinese Folk Religion, Chinese Buddhism, and Taoism). Unlike Mr. Lao, the Chinese dragons lacked wings. They had long sinuous serpentine bodies with four limbs. Despite lacking wings, many were able to fly though it was via mystical means. Some of the Lung dragons were of the marine type, making them sea dragons. Depending on the type or breed of Lung Dragon was the type of power they had, all of which were mystical powers that were based on the control/manipulation of specific elementals forces (e.g. wind, fire, water, etc) and/or the projection of elemental attacks (e.g. freezing cold, lightning bolts, fire breath). The size of Lung dragons varied greatly based on the breed and where they were in the hierarchy, ranging from dragons several feet in length to those that were the size of mountains.[1]