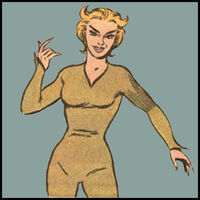 I am the Sphinx! The original model for the countless ancient statues constructed in worship, of me! I am the Cat-Goddess... The Immortal Defender of the Animal World Against the Human World!

Lydia Fellin was a mythological Queen of the Cat World, who had supernatural powers and was indeed a Living Sphinx. She was first thought of as an enemy when she freed several lions and tigers from the zoo, but the Fly quickly understood her motives of trying to help the animals escape the cruel conditions they were subjected too.

When Ralph Hardy made his journey to the Valley of the Sphinxes to explore the ancient Egyptian ruins, he encountered Cat Girl for the first time. She threaten him and his exploration team because they were invading her valley. When she summoned the Sphinx creatures to attack, Ralph became the Jaguar and began smashing and crumbling the stone creatures. Cat Girl implored him to stop, for he was destroying beautiful ancient relics.

Though at first she vowed to remain the Jaguar's bitter enemy, she would later fall deeply in love with him. She was determined to be his only girl — the one he would hopefully marry. She created love potions for him to drink, rescued him from an alien queen who held him as a captive husband, assisted him as part of the "Jaguar Rescue Team" and broke up a gang of cat burglars to show her loyalty to him.

She would eventually lose her supernatural powers due to being exposed to radiation from an atomic testing site. She now only retained her telepathic control over cats. She took on a new identity as a jet-set socialite, and continued to fawn over the Jaguar, trying to prove her trust and love.

Slowly, he did begin to feel an attraction to her. He even confessed to her that she was the loveliest woman he had ever met, and caring for her wouldn't be difficult... just inevitable.[1] The two began dating, but it is unclear if they finally married.