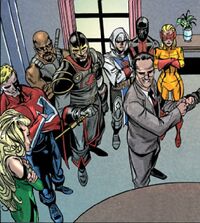 Base of Operations
Whitehall, London
Affiliations

Origin
MI-13 is the department of British Intelligence which deals with the paranormal, formed from the remains of numerous predecessors. It handles situations involving super-humans, the supernatural, aliens, and anything else that falls under its remit.

Over the years, the British Government has formed a number of organizations dedicated to dealing with paranormal occurrences, including S.T.R.I.K.E., the RCX, the Weird Happenings Organization (also known as W.H.O.), and Black Air - all of which eventually collapsed.

Black Air, the most recent of these organizations, attempted a coup in alliance with the British Hellfire Club, which was thwarted by European team Excalibur. The British intelligence community, acting on information received from Excalibur, had Black Air closed down, forcing it underground.

In the aftermath, the Government decided to take all of its previous paranormal organizations and fold them into a single Department, with Alistaire Stuart, formerly of the Weird Happenings Organization, as the Department's head.

As one of his first appointments, Alistaire gave psychologist Rory Campbell the post of mutant liaison and management. Rory traded information on the Legacy Virus with Sebastian Shaw of the Hellfire Club, in return for a prosthetic leg, replacing one that had been amputated. He was later captured by Apocalypse and transformed into one of his Horsemen.

MI-6 , the department of British Intelligence which dealt with matters abroad, wanted to bring paranormal matters under their wing. When an interdimensional capsule from another universe, the abortive advance guard for an interdimensional Martian invasion, appeared in Wapping, Alistaire led the operation investigating it. MI-6 arrived on the scene, and persuaded Alistaire that only MI-6 had the resources to fight threats like the craft's makers. Alistaire attempted to close the Department down that day, but Pete Wisdom and Sir Mortimer Grimsdale, chairman of the Joint Intelligence Committee, prevented him.

Alistaire left the Department to head up an intelligence team in MI-6, while Wisdom was appointed as the Department's senior officer, reporting only to Grimsdale. Sometime during Wisdom's tenure, the Department was renamed MI-13.

When Otherworld's fairies kidnapped the baby of a Cabinet Minister as part of an attack on Britain, MI-13 were charged with retrieving the baby and forcing the fairies to the bargaining table. Wisdom's operations team included Wisdom himself; Sid Ridley, Captain Midlands, product of a British Super-Solider program during World War II, now an OAP; John the Skrull, a former member of the Skrull Beatles, who adopted the form of John Lennon; Tink, a fairy dissident and former resident of Otherworld, and their newest recruit, Maureen Raven, a clairsentient from Ulster.

MI-13 confronted the fairies in Otherworld, but were only able to stop them when Tink revealed herself as the daughter of Oberon, King of the Fairies, and demanded her father end the attack. Oberon proposed a new covenant between Britain and the fairies, which was sealed by Tink's marriage to Wisdom.

Wisdom's team went on to investigate terrifying dreams caused by one of the slumbering giants of Britain; re-awoke the Red Dragon of Wales, who'd lost himself in human form; and managed to stop the full-on interdimensional Martian attack, but only at the cost of Maureen's life.

A fanatical sect of Skrulls had been infiltrating Earth for years, preparing the way for a full-scale invasion. When the invasion began, Grimsdale had three of the Skrull Beatles killed. Only John was left alive, thanks to 'conflicting orders' from above. Grimsdale came to kill John himself - and got close enough for John and Wisdom to spring their trap. John was able to identify Grimsdale as a Skrull infiltrator, allowing Wisdom to kill him.

In response to the crisis, the Prime Minister decreed that every British superhero now worked for MI-13. Grimsdale's death left the Joint Intelligence chair vacant; at the Prime Minister's request, Wisdom now reported directly to him.

Equipment: MI-13 has access to both technological and mystical resources, including plasma holo-projectors, flechette cannons, inter-dimensional sensors and scanners, rituals allowing travel to Otherworld, and nanominium, used as anti-magic protection, O is the department's quartermaster.
Transportation: Helicopter.
Weapons: None known.