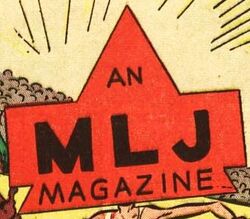 During the superhero boom of the 1940s, MLJ produced various titles featuring their own superheroes, including the first patriotic-themed superhero The Shield and an early "magic ring" hero, The Fly.

During the 1960s, the MLJ heroes were made into a team called The Mighty Crusaders.

Archie Comics tried reviving the heroes over the years, with varying degrees of success. In the 1970s and 80s, they created the imprint Red Circle Comics to publish non-Archie characters, such as their superheroes.

By September 1985, Archie Comics discontinued the Red Circle titles due to expenses.

In 1991, the Red Circle superheroes were licensed by DC for their Impact comic line.

In 2008, it was announced that the characters would be introduced in the pages of Brave and the Bold (volume 3) as part of the DC Universe. This never came to be.

Their first introduction as New Earth citizens occurred in October 2009 when DC published The Red Circle — four one-shots with each issue spotlighting on a newly, revamped DC version of a MLJ/Red Circle superhero. The one-shots featured: The Hangman, Inferno, The Shield and The Web.