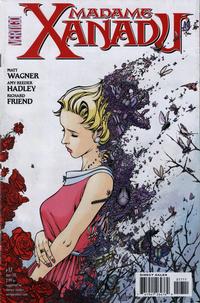 What relics do these ”weekend Satanists” seek to obtain.

Madame Xanadu continues to try to determine the source of Bettie Reynolds’ suffering. Something draws her to an “apartment coven” called Church of the Midnight Dawn. This leads her to follow Fred Hanson, and then Charles “The Professor” Kowalski, who meets with Mr. Delucia, a gangster. The Professor has asked Mr. Delucia to obtain some artifacts for them. Then, Madame Xanadu runs across a strange Detective that claims he is working the same case. She feels as if he were probing her very thoughts. She tells him that if he wants to talk, he knows where to find her, and disappears. Betty Reynolds, now a brunette, has taken up smoking to try to kill the bugs that come out of her mouth. Her teeth start falling out, and she finds new teeth growing in. She also discovers that her eyes are now blue instead of brown. She also has uncontrollable urges. Once again, she goes to see Madame Xanadu, only to have a plague of insects erupt from her mouth. Madame Xanadu has learned that Bettie is the victim of “Transubstantial Possesion” – she has been possessed by Xanadu's sister Morgaine le Fey.

Retrieved from "https://heykidscomics.fandom.com/wiki/Madame_Xanadu_Vol_1_17?oldid=1455316"
Community content is available under CC-BY-SA unless otherwise noted.