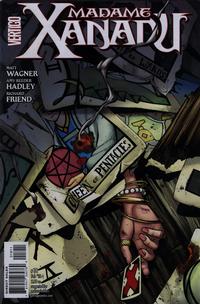 Morgana visits her sister Madame Xanadu. Madame Xanadu’s brave cats try to defend her, but after Moonshadow dies, Madame Xanadu casts a sleep spell on them. It would seem that Morgana did not visit to fight. Morgana reveals that using Betty Reynolds body as a conduit was merely convenient. Mobster Vincente Delucia is working on collecting artifacts for the Church of the Midnight Dawn, and Detective Jones decides that Delucia’s bodyguard Sonny Spinelli might be willing to give-up some details.

Morgana explains to her sister how after King Arthur used Excalibur to kill her son Mordred, she was taken prisoner, escaped, and then went to live underground with goblins to regain her power, which she has since used to interfere in the lives of men – starting wars. After the story, a fight ensues, destroying Madxame Xanadu’s home.

Retrieved from "https://heykidscomics.fandom.com/wiki/Madame_Xanadu_Vol_1_18?oldid=1455317"
Community content is available under CC-BY-SA unless otherwise noted.