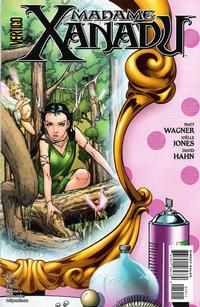 Flash back to Madame Xanadu (Nimue) and her sister, Morgana, as children, and how they deal with the coming of mankind to the shores of Fairy.

Retrieved from "https://heykidscomics.fandom.com/wiki/Madame_Xanadu_Vol_1_19?oldid=1455318"
Community content is available under CC-BY-SA unless otherwise noted.