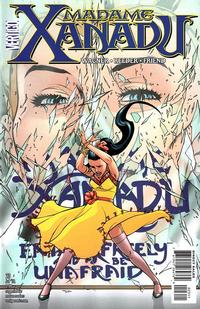 Detective Jones and Madame Xanadu are trapped by Morgana in a burning building, but Madame Xandu teleports them out just in time. After falling into the East River, they return to Madame Xanadu’s Brownstone to prevent Morgana from finding the hidden War-Helm of Mordred. After a fierce battle between the sisters, Madame Xanadu feigns defeat. She pleads to be spared, and reveals that the Helm is hidden in her safe. Only upon removing it, she instead removes a lock of Betty Reynolds’s Hair, which gives Xanadu power over her sister, Bettie Reynolds being the host body of whom Morgana has possessed. Xanadu incants a spell to return Bettie’s spirit to her body which displaces Morgana from the body in a violent, bug-filled explosion, ending with the return of Bettie Reynolds to her own body!

Retrieved from "https://heykidscomics.fandom.com/wiki/Madame_Xanadu_Vol_1_23?oldid=1455322"
Community content is available under CC-BY-SA unless otherwise noted.