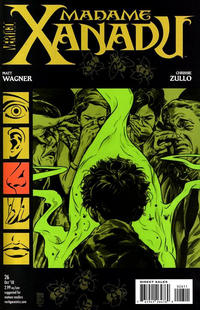 You’ve been seeing me in your dreams, haven’t you? That’s because, as I said, I’ve been trying to find you.

Sammy stinks. Real bad. He has trouble remembering things. He is not allowed in school, and has no parents. He wanders the city. At night, the dogs find him, and chase him, but he gets away. Safe in an abandoned basement, he dreams that he is Sammy Starrider, chased by The Space Witch. In waking however, he is picked up by Officer Jorgans. Jorgans puts Sammy in the squad car, windows up, and is overpowered by the smell. The smell gets worse when Sammy is scared. Finally, chased by the dogs, he is found by The Space Witch - Madame Xanadu! With a few magic words, Madame Xanadu restores Sammy’s memory, and all the ghosts that come with it.

Retrieved from "https://heykidscomics.fandom.com/wiki/Madame_Xanadu_Vol_1_26?oldid=1455325"
Community content is available under CC-BY-SA unless otherwise noted.