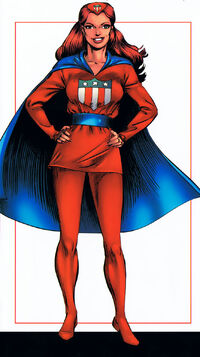 Sister, you asked for it!

Miss America has appeared in almost 70 years worth of Marvel publications. Below is an abridged version of her history. For her complete history see The Unabridged History of Madeline Joyce.

Madeline Joyce, the niece of a millionaire who was financing electrical experiments of an unknown nature in a converted lighthouse on the East Coast of America. One night, Joyce was visiting the lighthouse during a violent electrical storm. She was caught in a powerful electrical discharge from the equipment triggered by the storm outside. Joyce miraculously survived the accident, but lay in a coma for a week. The discharge, however, activated her latent mutant(?) abilities.

It was during WWII that Miss America became nationally famous. Shortly after the United States entered the war, the team of Allied champions known as the Invaders were captured and brainwashed by the Nazi agent the Red Skull. Under the Red Skull's influence, the Invaders attacked a domestic defence plant. Bucky Barnes, who had escaped capture, commandeered a New York City radio station, and began a marathon broadcast to round up available superhumanly powered crime fighters to counter the threat. Barnes had located existing FBI files on several such crime fighters, including the Whizzer, and broadcast specifically to contact them. Miss America heard the message while battling a Nazi spy ring in upstate New York, a mission in which she first met and fought alongside the superhuman crime fighter the Whizzer.

After the war ended, the Whizzer and Miss America became members of the short-lived All-Winners Squad. The Squad disbanded after a few years, and the Whizzer and Miss America resumed their civilian identities of Robert Frank and Madeline Joyce and were married. In 1949, they began work for the United States government as non-costumed superhuman security agents at a secret nuclear project located in New York City. Unknown to Frank, Isbisa, a former enemy of the All-Winners Squad, sabotaged the facility and staged a nuclear accident which exposed the Franks to massive amounts of radiation. Although Isbisa's act of revenge did not kill the Franks, Madeline was pregnant at the time, and several months later gave birth to a radioactive mutant son, Robert Frank Jr., later called Nuklo. Because the baby emitted dangerous levels of radiation, the United States government took custody of him and placed him in an experimental chrono-module. There he would be kept in suspended animation until he ceased to emit dangerous levels of radiation.

Leaving the research facility with a generous government pension, the Franks decided to travel the world. Madeline Frank became pregnant again, and was in the tiny Balkan country of Transia when the pregnancy came to term. The Franks had found refuge in the scientific citadel atop Wundagore Mountain at the recommendation of nearby villagers who believed it to have modern medical facilities. With the evolved cow called Bova Ayrshire as midwife, Madeline gave birth to a stillborn child, even more radioactive and mutated than her first child. Madeline died of radiation poisoning hours later.

Years later, a mysterious villain resurrected Madeline alongside a number of other heroes and villains (including Kraven, Mysterio and Anarchist) in order to use them as his elite soldiers.

Doctor Lawson is the name of the scientist whose experiment accidentally gave him the same powers Miss America would gain on purpose.