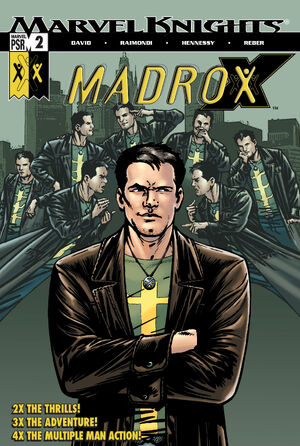 He's referring to "Film Noir" -- a French term literally meaning "Dark Film" -- pertaining to 1950's crime movies noted for their cynical, amoral characters in a sleazy setting, pervaded with a sense of hopelessness.

Appearing in "The Chicago Whey"Edit

Synopsis for "The Chicago Whey"Edit

In Chicago, Jamie rescues Stringer, a reporter, from street toughs hired to assault him by a Mr. Capetti in retaliation for stories that Stringer had written in the Tribune. Jamie blackmails Stringer (who is secretly a telepath) into using the Tribune's files to help him find the woman he saw in his dupe's memories. Jamie and Stringer discover that the woman is Sheila Desoto, fiancee of crime boss Edward Vance.

The dupe Jamie left in New York to run the agency installs some new windows and meets with a new client, Carol Campbell, who's concerned that her quadriplegic husband is cheating in her by way of astral projection.

Jamie sneaks on to Vance's property and finds Sheila swimming topless. Se recognizes Jamie and gives him a big fat kiss, but just as the dupe is being shot in New York, Jamie feels its pain and passes out, falling into the pool.

Retrieved from "https://heykidscomics.fandom.com/wiki/Madrox_Vol_1_2?oldid=1440920"
Community content is available under CC-BY-SA unless otherwise noted.