Start a Wiki
Part of the 'Revolution' event 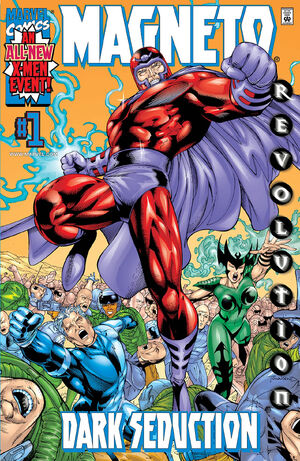 Appearing in "The Masada Maneuver"Edit

Synopsis for "The Masada Maneuver"Edit

It has been several months since Magneto assumed control of the island nation of Genosha. In that time, he has made incredible strides to unify and rebuild the once war-torn and chaotic country. His success has come from ruling with an iron hand and deftly managing the nation’s remaining assets. His cabinet is an eclectic bunch, with some questioning his rule, including his own son, Quicksilver. Genosha’s rebirth is hindered by a rebellion in Carrion Cove and limits on the nation’s resources due to UN sanctions. Magneto finds support for his waning powers from Polaris, who in turn is gaining knowledge of her own powers from the true Master of Magnetism. Quicksilver worries that she may be seduced by this power. The rebellion uses former Acolytes-turned-mercenaries to stand their ground and protect a secret so great, it prompts Amelia Voght to join their cause to keep it from Magneto’s hands. The UN decides that their original appointee, Dr. Alda Huxley, is too personally involved and sends a new envoy… Magneto’s daughter, the Scarlet Witch.

Retrieved from "https://heykidscomics.fandom.com/wiki/Magneto_Dark_Seduction_Vol_1_1?oldid=1440934"
Community content is available under CC-BY-SA unless otherwise noted.