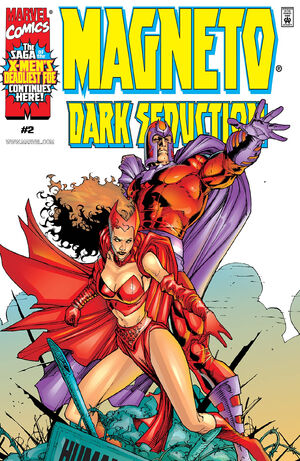 Magneto accompanies the Scarlet Witch on a tour of Genosha to show her how much the nation has prospered under his rule. She cannot help but be impressed by his results despite her misgivings and past relationship with the Master of Magnetism. Quicksilver learns the secret hidden in Carrion Cove and allies himself with those determined to keep it from Magneto. The Genoshan forces take the Krolik Foothills and still do not know how the former Acolytes who work for the rebellion have grown so powerful. Wheels within wheels turn as Cortez secretly reports to the UN the latest in Genosha, with his own agenda clearly in play. Pipeline realizes that Pietro knows the truth of what Carrion Cove is hiding and teleports him away. He is determined to claim this power for himself and rid Genosha of outside rule once and for all. He then teleports the rebels and their mutant allies away and is about to claim the prize for himself when Carrion Cove is rocked by yet another attack! The UN has deployed a “special task force” of their own to protect the hidden technologies at Carrion Cove. They’ve sent in the Avengers!

Retrieved from "https://heykidscomics.fandom.com/wiki/Magneto_Dark_Seduction_Vol_1_2?oldid=1440936"
Community content is available under CC-BY-SA unless otherwise noted.