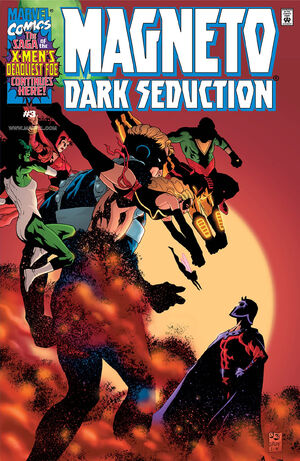 Appearing in "Something Worth Fighting For"Edit

Synopsis for "Something Worth Fighting For"Edit

The Avengers’ arrival in Genosha sparks a battle with the Genoshan cabinet. This ends when Quicksilver explains to all what is hidden in Carrion Cove and why they cannot allow Magneto to access it. Magneto arrives with Polaris and battles the Avengers to a standstill. Alda Huxley learns of Fabian Cortez betrayal and confronts him. He offers information that she finds valuable and they strike a bargain. Quicksilver and the Scarlet Witch try to disable the coveted equipment while Magneto is occupied on the battlefield. Magneto pushes Polaris’ powers beyond their limits in order to end his battle with the Avengers. While the assembled heroes try to save lives in the wake of the destruction Magneto unleashes, he goes to claim his prize. All the stands in his way are his estranged children. He chooses to give up his chance for reconciliation to attain this power and forcefully subdues them. He is about to acquire the advanced genetic devices that will restore his powers when Polaris arrives to stop him!

Retrieved from "https://heykidscomics.fandom.com/wiki/Magneto_Dark_Seduction_Vol_1_3?oldid=1440937"
Community content is available under CC-BY-SA unless otherwise noted.