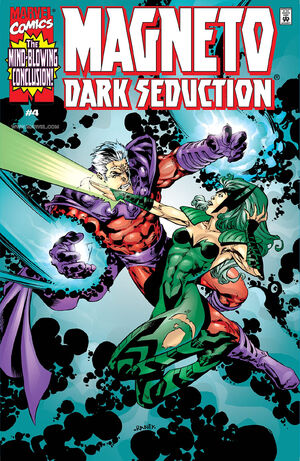 Appearing in "By Right of Force"Edit

Synopsis for "By Right of Force"Edit

Polaris confronts Magneto in an effort to stop him from claiming the advanced mutagenic equipment hidden in Carrion Cove and restoring his fading powers. Magneto defeats her and uses the machines to repair his damaged DNA. The Avengers focus their efforts on saving the lives of those endangered during their fight against Magneto. When he emerges once more, he is invigorated and uses his powers to immobilize Earth’s Mightiest Heroes. He tells them to get out of his country and when they try to argue that the UN didn’t agree to this, he points out they have violated their own treaty and that they and Roxxon have been supporting the rebellion against him. He refuses to recognize human law. The Wasp declares that it’s in the world best interest that they stop him here and now. He asks how they plan to do that and as a demonstration of his raw power, he magnetically reaches out to Hammer Bay, grabs the traitorous Fabian Cortez and smashes his body against the rocks before the assembled heroes. He then positions satellites and threatens to crash them into major cities if the Avengers don’t leave. The Wasp relents and Magneto exchanges harsh words with his children: Wanda and Pietro before they depart. He tells them that they have once again disappointed him and they express their disgust with him. Polaris departs as well, explaining that it’s what Alex would have wanted her to do. Magneto is left alone to rebuild Genosha and prepare for the next stage of his plans. Quicksilver and Polaris prepare themselves for the coming genetic war on the horizon.

At one point an image of W:C:marvel:Nathaniel Essex (Earth-616)Mr. Sinister hovers over Fabian Cortez. This may imply that Mr. Sinister played a role in Cortez’s unexplained recovery from his previous death at the end of the Bloodlines crossover in Avengers #369.

Retrieved from "https://heykidscomics.fandom.com/wiki/Magneto_Dark_Seduction_Vol_1_4?oldid=1519443"
Community content is available under CC-BY-SA unless otherwise noted.