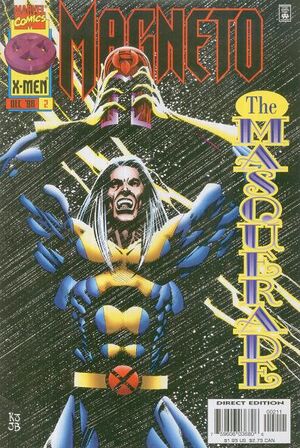 Joseph continues to pretend to be Magneto in order to win the Acolytes’ support but finds himself slipping deeper and deeper into the role. Despite learning that Cortez tried to kill the true Magneto, he continues with the plan set forth by Cortez to stop the ascent of New Avalon. The Acolytes are further convinced of his veracity when he repels several attacks by human aggressors but are bewildered when he spares the life of the commanding officer. The mutant-hating Col. Armstrong berates Magneto with his dying breath and drives home the horrors that Magneto was responsible for in the mind of Joseph, who is overcome with guilt. After heroically defending himself and the Acolytes against a nuclear attack, Magneto agrees to lead the to New Avalon. Meanwhile, Exodus has tortured Amelia Voght and learned the truth about Joseph and smugly awaits his arrival.

Retrieved from "https://heykidscomics.fandom.com/wiki/Magneto_Vol_1_2?oldid=1440944"
Community content is available under CC-BY-SA unless otherwise noted.