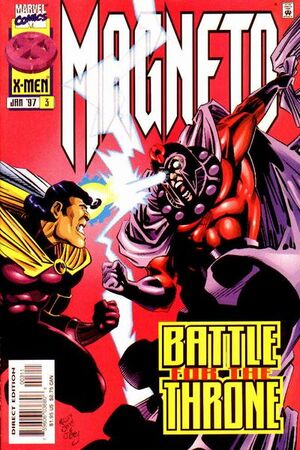 This is no longer a ruse, Cortez. The Joseph persona was weak...and unwanted. It no longer inhabits my psyche. The one true Lord Magneto has returned!

Joseph visits the family of the colonel who died after trying to nuke him and the Acolytes in an attempt to end the cycle of violence. His efforts prove futile, and he is exposed as a mutant and chased away by an angry mob. He continues to struggle with the pretense of being Magneto, but despite his efforts to get out of the deception and be honest with the Acolytes who have faith in him, Cortez continues to draw him back into his web of deception.

As New Avalon rises, the Acolytes are reunited, and Magneto and Exodus come face to face. Exodus is nearly convinced that Joseph is Magneto until Joseph greets Amelia Voght with a lover’s kiss, as Cortez suggested. This confirms to Exodus that Joseph is an impostor, and Exodus and his followers attack and drive the false Magneto from New Avalon, all the way to the core of the planet. While Cortez tries to win favor with Exodus now that his plans are thwarted, Joseph returns shortly thereafter, stronger, more powerful, and truly convinced that he is Magneto.

Retrieved from "https://heykidscomics.fandom.com/wiki/Magneto_Vol_1_3?oldid=1440945"
Community content is available under CC-BY-SA unless otherwise noted.