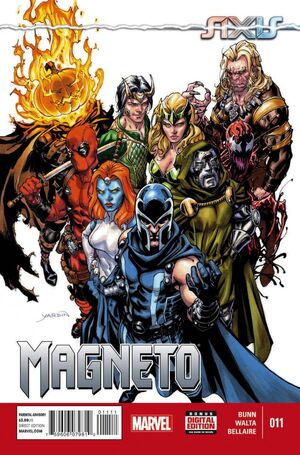 • The Red Skull is sending the world into a spiral of destruction…and Magneto is one of a handful of heroes with the means to stop him!

• But will the Master of Magnetism also crumple before the maniac who’s using the formidable telepathic powers of his deceased best friend to usher in his new, terrifying Reich Eternal?

• With the grudge personal on MANY levels, Magneto is amply motivated to be the one to take down the Skull once and for all!

Retrieved from "https://heykidscomics.fandom.com/wiki/Magneto_Vol_3_11?oldid=1647320"
Community content is available under CC-BY-SA unless otherwise noted.